An introduction to Sousaphones...

The sousaphone is a valved brass instrument with the same tube length and musical range as other tubas.

The sousaphone's shape is such that the bell is above the tubist's head and projecting forward. The valves are situated directly in front of the musician slightly above the waist and all of the weight rests on the left shoulder. The bell is normally detachable from the instrument body to facilitate transportation and storage. Except for the instrument's general shape and appearance, the sousaphone is technically similar to a tuba.

Most modern sousaphones are made in the key of BB♭; many older sousaphones were pitched in the key of E♭, but current production of sousaphones in that key is limited nowadays. Although sousaphones may have a more restricted range than their concert tuba counterpart (most sousaphones have 3 valves instead of 4 to reduce weight), generally they can all play the same music and usually have parts written in the bass clef.

The sousaphone is an important fixture of the New Orleans brass band tradition and is still used in groups such as the Dirty Dozen Brass Band by Kirk Joseph. Soul Rebels Brass Band from New Orleans features sousaphone player Edward Lee, Jr. 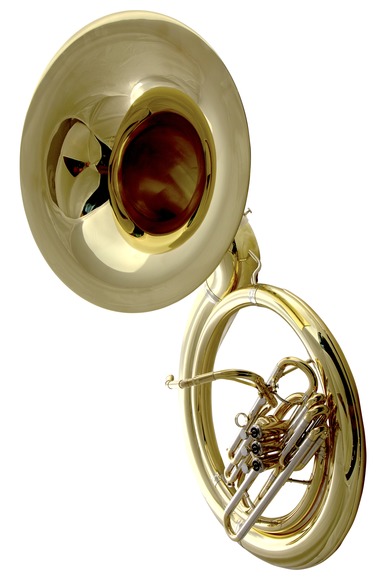 The JP2057 Sousaphone is the perfect instrument for the field. It fits incredibly well within any marching band, Trad Jazz band or even an early big band. With complete ease, the sousaphone can turn from a mellow bass instrument, to a roaring forward facing monster, suitable to blast any bass line that is needed.

This sousaphone features a large .687" bore, and alongside the 26" forward facing bell, it offers a rich, resonant tone with excellent projection and volume. The JP2057 Sousaphone also has very quick responsive valves and is perfectly weighted and shaped to allow a comfortable playing position. The leadpipe is detachable, and is assembled from 3 separate parts, allowing the player to choose the most comfortable mouthpiece position.

The JP2057 Sousaphone is supplied with a high quality, protective hard case, with plenty or firm padded blocks to ensure that the instruments remains secure in the case. It also comes with a mouthpiece and a basic maintenance kit containing valve oil and tuning slide grease.

Find out more about the JP2057 Sousaphone here