A Guide to the Marching Baritone

Specially wrapped versions of the baritone horn have been created for use in marching bands and drum and bugle corps...

They have three valves and a front-facing bell and are the tenor voice of a drum and bugle corps, below the soprano voice of the trumpet, the alto voice of alto horn or mellophone, and above the low tubas.

Used widely across the USA, marching instruments and marching bands fill up stadiums and colleges, but are now becoming more frequently used over in Europe in jazz and street bands. 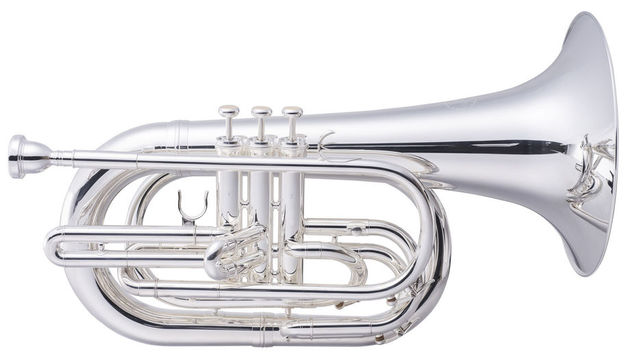 The JP2053 Marching Baritone has darker tone than a trombone yet brighter than a euphonium and will add a very rich sound to your band. Balanced in weight amd timbre it is an ideal addition to the marching band.

With its large bore and forward facing 10" bell, the marching baritone has a super dark sound, perfect for blending within an ensemble or band. The marching baritone is also equipped with stainless steel valves with nylon valve guides, a lyre box and 3 lever water keys.

The JP2053 Marching Baritone is supplied with a strong ABS hard plastic case, as well as a mouthpiece, valve oil and tuning slide grease.

Find out more about the JP2053 here