A Guide to the Mellophone

These instruments are used instead of French horns for marching because their bells face forward instead of to the back (or to the side), as dissipation of the sound becomes a concern in the open-air environment of marching. Tuning is done solely by adjusting the tuning slide, unlike the French horn where the pitch is affected by the hand position in the bell. 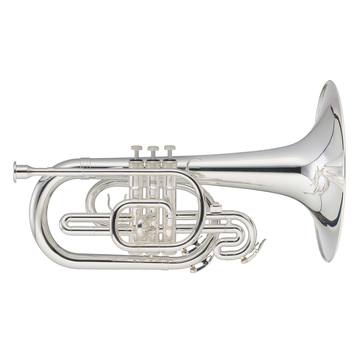 You will find that the JP2051 Marching Mellophone has a rich sound that blends well in the middle register of the marching band. It is ideally balanced to suit the hand of any player.

Constructed from High Grade Brass and available in a lacquer finish or silver plated, the JP2051, with its forward facing bell suits anyone playing in a high school/college band, as well as being used more frequently in Europe in jazz and street bands. Equipped with stainless steel valves, and nylon valve guides, the Marching Mellophone is smooth and most importantly, well balanced to be held up in a playing position.

The JP2051 Marching Mellophone is supplied with a strong ABS hard plastic case, as well as a mouthpiece, valve oil and tuning slide grease.