Tenderlonious Presents a Sound Clip of the JP011 Flute

Ed Cawthorne AKA Tenderlonious visited our John Packer base in dire need of a flute for a gig... Since then we've formed a great friendship and this unbelievably talented musician has recorded a number of soundclips  of our JP flutes. Today we present the first - on the JP011 Flute.

The JP011 is perfect for new players looking for their first full size flute. This beginner model is very capable of supporting new players through the lower grades. Designed especially with younger players in mind, the JP011 is a favourite with the UK education system for supporting swift progression. 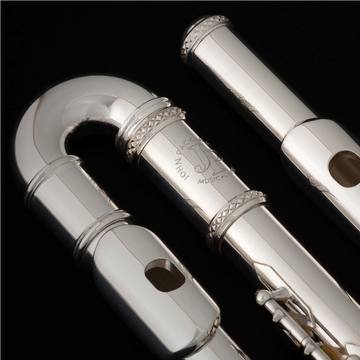 Available as a single headjoint, or as the JP011CH which includes both a curved and straight headjoint, younger players can start with the curved headjoint before easily swapping to the straight version when they are ready. This model is a favourite with parents as the two headjoints increase the instruments longevity before an upgrade is required.

Ed seems to have everything going for him; 22a record label boss, producer, saxophonist and latter day flute enthusiast, Tenderlonious is one of the hardest working men in music, bridging jazz, house and beats with restless ease. Tenderlonious is associated with the talents of Al Dobson Jr, Henry Wu, Jeen Bassa, Reginald Omas Mamode and Mo Kolours. He takes inspiration from the eastern jazz sound of Yusef Lateef, the sampling habits of J Dilla, and his studies with sax greats like Israeli legend Gilad Atzmon and Ronnie Scott alumni Pat Crumly.

Here’s what Ed had to say about 2 of the John Packer Student range flutes:

"The JP111 and JP011 are both great flutes. They have been designed very ergonomically, which makes them comfortable and accessible instruments to play. The headjoints have been cut well, making it is easy to produce a clear tone across the three octaves without the need to over-blow.  They are also very reasonably priced instruments.  I would recommend either of these flutes to any beginner flautist."

Find out more about the JP series of flutes here